I interviewed a veterinarian. Ever since I gave my future some deep thought, I realized that I would probably go into agriculture, natural resources, or animal sciences. Being a veterinarian fit this criteria, and I was “down” with working with different animals instead of just humans all the time. This interview gave me insight into what it was like to be a veterinarian and some of the pros and cons that came with being one.

Passion does not always come immediately and can gradually be inculcated with time.

Being able to keep emotions out of a decision can often help us make rational decisions that don’t negatively impact us.

Accepting changes can often help us make the best out of a situation.

In this new era of technology, fast paced films have become all the hype, replacing books as the new medium for masterful storytelling. Or, has it? In my opinion, the most effective medium for telling the “Harrison Bergeron” narrative is through text. While movies may be better at portraying the objective parts of a narrative, texts simply excel when it comes to subjectivity. The narrative describes the ballerina Harrison chooses as his “empress” as “blindingly beautiful”(2). This immediately conjures a picture of someone extremely beautiful for the reader. Beauty, however, is subjective, as our perception of who is beautiful is strongly influenced by our own personal subjectivity and biases. Simply put, there isn’t a universal criteria for someone who is beautiful. Since texts use description and leave a certain amount of autonomy for the reader to develop their own picture, texts have the power to effectively tell subjective concepts, such as beauty, whereas a film will be limited in its ability to do so. Additionally, the film changes too much of the original content. In the film, George states “if I take them off, I’ll want to keep them off”(Tuttle & Halvorssen, 2009). While this sounds dramatic and suspenseful, the statement is completely different from George’s original fear of “be[ing] right back in the dark ages again”(2). Some difference between the film and the text is acceptable, but changing the original wants and fears of the main character simply changes the plot too much. This isn’t necessarily the fault of the director, however, but the fault of the medium. Films don’t leave enough space for interpretation and forces the director to show everything. Through text, the reader can make inferences about the “dark ages” without the author having to explicitly describe the dark ages, while a film simply can’t without leaving the audience confused. With complex stories that have various interpretations, such as “Harrison Bergeron”, text is the best medium for telling the narrative, so films should avoid adapting texts that involve high amounts of subjectivity.

A thing is right when it tends to preserve the integrity, stability, and beauty of the biotic community. It is wrong when it tends otherwise

Aldo Leopold. The name doesn’t conjure pictures of a billionaire entrepreneur, an Oscar winning actor, or an influential politician. In fact, to most people, Aldo Leopold simply doesn’t create a picture at all. For someone who pioneered and laid the foundation for the modern environmental movement, this seems ironic or perhaps a sad reflection of society’s values.

Aldo Leopold was the author of The Sand County Almanac and various other essays that advocated environmentalism. 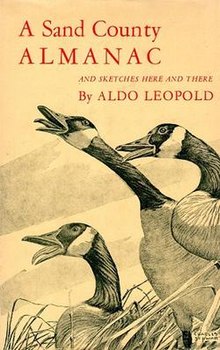 Through his Land Ethic and his eloquent writing, he was able to bring up the philosophy of environmentalism and tell millions about the moral duties humans had to the natural world. Despite passing away over seventy years ago, Leopold is still remembered today, which leads me to believe that his legacy will be remembered even a century from now. In the face of post WW2 American capitalism and emerging concepts, Leopold dared to say that land was an integrated, dynamic community of plant and animal life when nature was viewed as a mere commodity for making everyone richer. His want for wilderness areas to remain pristine, and his fear that in the face of human greed, nature would lose its footing and be used up until none was left for both humans and nature, drove him to poetically contest these ideas through his essays and novels. Leopold’s story is largely relevant today. Recently, the government and most people have taken a turn for environmentalism. From the introduction of Green Bins to straw bans, it is clear that efforts are being made to reduce the human impact on our beloved planet. Unfortunately, carbon emissions from industries and automobiles are still building up in our atmosphere leading to global warming. Despite there being evidence of climate change, such as the melting snow on Mount Kilimanjaro and receding glaciers, no affirmative action is being taken, just like how humanity ignored nature’s changes in the Midwest until the dust storms of 1937 during Leopold’s time.

The Dust Bowl, the cause of environmental indifference

Leopold’s story teaches us about our moral obligation to nature and why listening to nature’s changes and recognizing our role in promoting the health of the land is crucial in the long run. Additionally, despite his diligence and effort, Leopold’s story is largely unknown. Perhaps it’s the fact the Leopold himself doesn’t look like someone who is “cool” to follow. Perhaps it is a reflection of society’s unwillingness to sacrifice comfort for the betterment of the environment. Nevertheless, Leopold has done a lot and his story deserves to be told. The story of environmentalism is not that long, with the modern environmental movement having only started sixty years ago, but is filled with struggles between environmentalists and industries. Leopold stands out among the myriad of environmentalists because he helped lay the foundation for the environmental movement and influenced many people in his field. Additionally, his story is complete; Leopold’s struggles and work are completed, which makes him preferable over a nascent figure. From Leopold, we can take away many things, but perhaps the greatest thing we can take away is what Leopold preached from the very beginning, to recognize our role in promoting the health of the land and caring for it.

Leopold draws me to him for the same reason my eminent last year drew me towards him. Aldo Leopold has done so much, yet compared to billionaire entrepreneurs and politicians, little is written about him online. Additionally, his writing simply captivates my attention. I picked up the Sand Count Almanac expecting to read a series of essays with quotations and piles of evidence, but what I found was so much more. In fact, the first part of the book didn’t even seem to be making a point. Instead, Leopold took me through a journey, a twelve month journey on Leopold’s Wisconsin farm. Leopold turned his surroundings into philosophical statements about nature, such as when he took a journey back in time as he cut into a tree, comparing the environmental and historical changes that occurred during the time each ring of the tree formed. His writing was not what I expected, but it was a pleasant surprise.

These are some of the ways I compare with Leopold.

Leopold and I both have an appreciation for nature, which both us can ascribe to our time spent in North America. For Leopold, the undeveloped sections of the Midwestern United States instilled in him a sense of respect for nature while my immigration to Canada gave me an appreciation for nature, as the wilderness here starkly contrasted the gray skyscrapers and smog of metropolitan Korea. Both of us have determination. Leopold continued to fight for environmentalism while I continue to read books, finish hikes, and continue an assignment until it is finished. I wish to emulate Leopold’s creativity, selflessness, and his philosophy. Leopold doesn’t directly exemplify my own goals in TALONS, but I hope that by emulating him, a great writer, I can improve my own writing skills and write a speech that delivers the message I want to give to my audience. Some obvious barriers prevent me front connecting with Aldo Leopold. Leopold is white, I am Asian. Leopold was alive nearly a century ago where norms and values were much more different. Leopold is also an American who was born in North America. Being an immigrant, I cannot relate to someone who was born in the country they held citizenship in. Also, Leopold is a “Prophet” or someone who seeks to counter the problem of overpopulation and Earth’s diminishing resources by cutting back. Meanwhile, I am still undecided. While I believe in some of Leopold’s ideas, I still believe that the future’s conflicts can be solved through biotechnology that allows us to produce more per acre and use fuels more efficiently rather than making a complete switch by cutting back. Fortunately, I happen to have texts that Leopold wrote himself. By reading and emulating the books Leopold authored, I hope to understand his voice and present an accurate representation of Aldo Leopold on Night of the Notables.

In the era of information we live in, it is easy to be inundated by stories. With so many stories, choosing just one story as our main source can be very tempting, but this leads to us accepting single stories and getting an incomplete picture. If we wish to reject these single stories, we must consider multiple sources before making any kind of conjecture. We start to accept single stories when they are the only stories we are exposed to. Chimamanda did not come to write about white children and British culture because she considered it to be superior, she simply “did not know people like [her] could exist in literature”(Chimamanda Ngozi Adichie, 2009). Had she had access to only African literature as a child, she would have most likely only written about African children and African culture. Additionally, not giving into the stereotypes of the people and society around us can help us reject single stories. When Chimamanda was studying in the United States, she heard about the Mexican immigrants south of the border and quickly “bought into the story of Mexican abstract immigrants.”  Much to her surprise, when she visited Mexico, she found hardworking Mexicans, working and behaving just like any American would. This goes to show that accepting the stereotypes of the media and people around us prevents us from seeing the complete picture. It is true that there are some Mexicans who fit the stereotype of the “abstract immigrant”, but listening to a single story might make us assume that is the only kind of Mexican people you would meet; we would be generalizing the entire Mexican populace. Now, this doesn’t mean we should completely avoid single stories. While we can be “impressionable and vulnerable when we are in the face of a story”, remembering that the author of a story can only show what he/she wants to show and consulting multiple sources before making a conjecture can allow us to use single stories to our advantage.